Wilmington is the closest city to the Compass Pointe retirement community and offers an appealing mix of elegance, culture, and history.

Early explorers such as Verrazano noted the beauty of our area and saw it as the treasured gem it still is today. Established in 1739, what was once a settlement along the Cape Fear River has been named America’s Best Riverfront by USA Today, and is currently experiencing one of the biggest booms in development in its history.  Wilmington is rich in preserved history and culture, yet offers everything you could want and more. You’ll find unique shops and boutiques, fine dining restaurants with internationally renowned chefs, live performance venues abound, art museums and galleries, local breweries, and an eclectic nightlife.

Take a stroll along the Cape Fear River, or window shop on Front Street, where fine restaurants are abound. Catch a show at the 1,500-seat Wilson Center, which has hosted everything from Broadway shows and rock concerts to dance performances and the North Carolina and Wilmington Symphony Orchestras. Thalian Hall is home to a thriving local theater community dating back to 1858, making it one of the oldest theaters in the United States.

Wilmington is currently expanding and developing the north section of downtown with an expanded Riverwalk and Port City Marina, which has added new, modern and impressive restaurants and venues, such as Pier 33; four new hotels, including an Embassy Suites complete with a rooftop pool and bar; and new park spaces.

Mid-town Wilmington has an abundance of  shopping, dining, and entertainment options with Mayfaire Towncenter, The Pointe at Barclay Commons, and the expansion of Independence Mall. Wilmington’s suburbs feature popular parks teeming with playgrounds, jogging paths, tennis and basketball courts, and more.

Get Your FREE Coastal Area Guide! 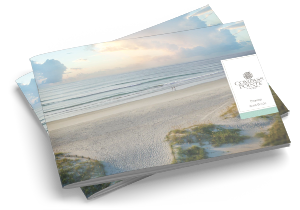 The town of Wilmington itself has a great small-town feel about it, filled with sophistication, history, and class.
~ Lori & Perry

Hollywood of the East

Wilmington has another nickname, Wilmywood, with films such as Iron Man 3, Safe Haven, and The Conjuring all featuring this beautiful city as their backdrop. It is not uncommon to spot an “A list” celebrity eating at one of the many fine-dining establishments of historic downtown. If you’re not afraid of the spotlight, head down to Screen Gem Studios to add your headshot to the extras list.

The only way to truly understand what it’s like to live in Wilmington is to visit and experience it for yourself. And, we know that when you visit, like so many before you, it will have a good chance of being the next place you call home. Come visit virtually or in person today!

Spend a weekend on the coast to tour the property, experience the luxury amenities, and see firsthand how Compass Pointe combines resort living with the comfort of your new home.

Visit Virtually or In Person

You can find out more about which cookies we are using or switch them off in settings.

This website uses cookies so that we can provide you with the best user experience possible. Cookie information is stored in your browser and performs functions such as recognising you when you return to our website and helping our team to understand which sections of the website you find most interesting and useful.

Strictly Necessary Cookie should be enabled at all times so that we can save your preferences for cookie settings.

If you disable this cookie, we will not be able to save your preferences. This means that every time you visit this website you will need to enable or disable cookies again.

This website uses Google Analytics to collect anonymous information such as the number of visitors to the site, and the most popular pages.

Please enable Strictly Necessary Cookies first so that we can save your preferences!

Please enable Strictly Necessary Cookies first so that we can save your preferences!